Gender Identification is the task of classifying an audio into gender labels (we used 'male' and 'female'). We needed to identify whether the voice present in each utterance was male or female since it is a very important step while trying to balance your data among gender classes, for any downstream task. This also helps in maintaining diversity in data.

Our intelligent data pipelines split each audio, based on Voice Activity Detection, as one of the starting steps. These shorter audio utterances can then used to train deep learning models. We assume that the utterances are short enough to have one speaker per utterance, since the splitting logic is using unvoiced segments as points to split an audio.

We use embeddings (explained in the next section) to train a machine learning based classifier and achieve an accurracy of 96% on our test set. (Datasets and training explained later.)

Voice Encoder is a speaker-discriminative model trained on a text-independent speaker verification task. Since these embeddings are able to summarise the characteristics of the voice spoken, they have been used for Gender Classification here, as shown in the diagram below. 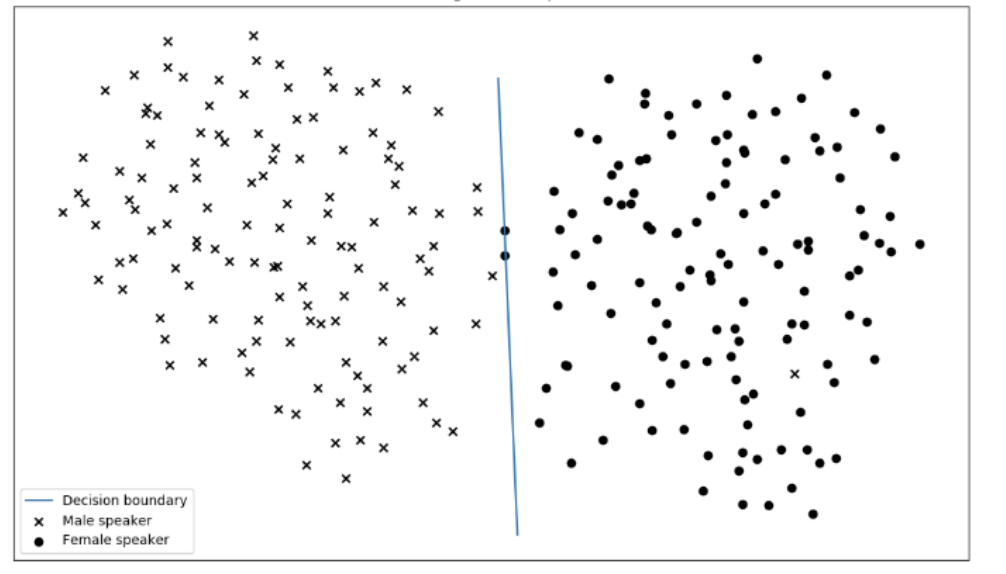 The above plot shows a clear boundary for gender between embeddings from distinct speakers present in LibriSpeech dataset, when projected in 2D using umap.

We use the Support vector machine classifier defined here to train for gender classification task, with embeddings from previous step and input, and their correct gender labels as target classes.

The advantages of support vector machines are:

Below is the description of each hyperparameter we used, with the value we used it it.

We used data for training as a combined set of audios in the following languages: Hindi, Tamil, Telugu, Kannada.